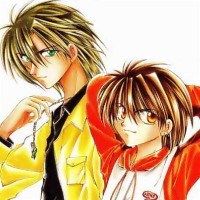 Shima and Kaori: Partners in Crime

Shima Yoshitsune and Suruga Kaori are "Anything Inc.", an all-purpose person company. They rely on each other greatly: Kaori depending on Shima because he is afraid that his other personality, Kyo, will eventually take over, and Shima on Kaori, because Kaori's smile reminds him of his father's. Shima and Kaori first meet in Volume 1 when they were trying to track down Kaori's stalker. In this case, Shima had to dress as a girl so they could find and stop Kaori's stalker, also known as "Mr. Snowman".