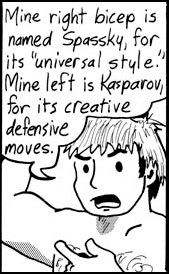 When people name their guns, or swords, or other conventional weapons, we have I Call It "Vera". This trope is when people name their "weapons." Or in plain English, their arms. This also sometimes happens with fists or any other body part that can be used in a fight. Usually occurs in the context of a threat, an actual fight, or just standing in front of a mirror admiring their physique (kissing optional).

Frequently Truth in Television. Has absolutely nothing to do with A Date with Rosie Palms. See I Call Him "Mister Happy" for when people choose to name their more...intimate body parts.