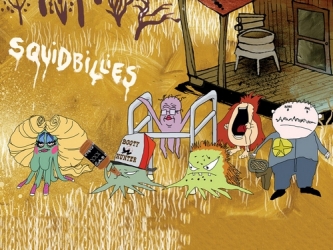 Do NOT touch the Trim!
"This show is called 'Squidbillies.' It takes place in a quiet little town nestled in the North Georgia Mountains... ...This is the story of all the people that live in this mountain town. But mostly, it's the story of Early Cuyler."
— The show's opening narration of the first episode.
Advertisement:

In the Appalachian Mountains of Georgia lays a small place called Dougal County. A rundown town ripe with illegal activity, debauchery, strange citizens, and all the alcohol and drugs one can want. Within the county is the Cuyler Clan, hillbilly squids — the titular squidbillies — that drink, make meth, mud-bog, and destroy property. The family includes: Early Cuyler, the main character of the series. He is the extremely violent, abusive, and drunk patriarch of the family. His hat always changes between shows, usually saying something like "Booty Hunter", "Sonny Lied!", or "Guns Don't Kill People, I Do". Rusty Cuyler, Early's son. He is more naïve and morally centered, but is also dumb and gullible. He was orignally a "Well Done, Son!" Guy but later episodes have him more mature and well-rounded, effectively becoming the Only Sane Man of the clan. Granny Cuyler, the feeble and senile mother of Early and Lil (maybe their granny or great granny, it's unclear the exact relation). She often sees visions of squid-Jesus. Lil, who runs a meth operation/beauty salon. Not quite a common character. There is more to the clan but they're family tree is so tangled that it's hard to list them all. The Cuylers are the last of their species, the Appalachian Mud Squids.

Among the town citizens include: The Sheriff, who is quite frankly terrible at his job. He frequently hangs out with the Cuylers but it always ends up with him getting used or maimed by Early. Initially a bit of a Straight Man to Early, he quickly turned into a good-natured Manchild. He dies fairly often, but is replaced by another sheriff from a sheriff clone farm (though it hasn't come up in later episodes, likely as an effort to develop him). Later in the series he is accompanied by Deputy Denny, a child-sized malformed clone of himself that tends to be a bit more competent at his job. There is Dan Halen, the Corrupt Corporate Executive and owner of Dan Halen Industries. A demonic entity that has existed for all time and spends his days furthering his evil goals. He effectively controls the town. His company appears to make sheetrock, but really dabbles in illegal activities and strange and often horrifying scientific experiments.

Season six introduces Tammi, a Closer to Earth redneck girl who becomes Rusty's girlfriend. Their relationship kickstarts a Story Arc where the two concieve a son named Macho Man Randy Cuyler. Having more responsibilities and needing to financially provide for them, Rusty becomes more sane and mature as he gradually realizes how awful his family (mostly Early) and home life really is - which would come to head in the final season.

A typical episode of the show has the family run rampant around their town; interacting with the locals and supernatural beings/happenings. They cause all sorts of antics and crimes that will eventually lead to massive destruction, the maiming of innocents and also themselves, and usually lots of casualties also including themselves. Most plots are never resolved and episodes frequently end on a comedic smash cut to credits. As time went on the show took a backseat on its satire on southern life and just became more insane, with copious loads of Gorn and Bloody Hilarious slapstick.

The show was initially one of the more controversial series to air on Adult Swim; the pilot debuted on April Fools' Day 2004, to horrible reviews (in the show's defense, the premiere was a rough cut - "rough cut" here meaning that some portions were not even fully animated). However, when the series was officially premiered in October 2005* It was supposed to premiere in November 2004, but fell behind schedule and was replaced with Perfect Hair Forever in the meantime, the series slowly but surely found its niche. It now has something of a cult following, and became one of Adult Swim's longest running shows, with thirteen seasons and over one hundred thirty episodes, formally ending its run in December of 2021 with a Grand Finale.

Do Not Touch the Tropes!

"And so Rusty moved with Tammi and Macho Man to Elberton, thus hopefully breaking the cycle of poverty and abuse. Early would swear to exact his revenge, but like many other things in Early's life, he never followed through. Deeming Elberton too close to the edge of the flat earth and not worth scaling an ice wall to tangle with dragons."
"This show was called Squidbillies."
— The show's ending narration of the Series Finale.
Feedback

Dan Halen uses a "time-travel matrix" to distract Early, who shows a surprising bit of insight on how light works.

Dan Halen uses a "time-travel matrix" to distract Early, who shows a surprising bit of insight on how light works.