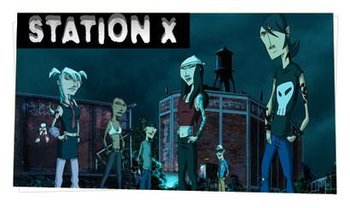 Station X is an animated series from the Quebec studio Cité-Amérique (who also did the Animated Adaptation of The Dragon Series) that ran on Teletoon's Detour block (the channel's version of Adult Swim).

The series follows six young Internet-savvy adults (Kandi, Davis, Seven, Slate, Knob, and Jesse) living in a loft in Montreal. They live their lives, they deal with issues, and they watch videos on the Internet.

One of the hooks of the show was that it used music videos and episodes of Angry Kid to break up the plot into segments.

The series ran from September 3rd to November 20th, 2005 for a single season of 13 episodes.

Not to be confused with a 1999 British television documentary series.