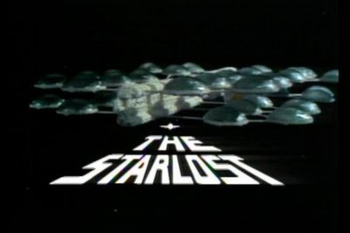 Doesn't look 8000 miles long, does it?
“The giant Earth ship ARK… drifting through deep space over 800 years into the far future. Its passengers, descendants of the last survivors of the dead planet Earth, locked in separate worlds heading for destruction… unless three young people can save… The Starlost.”
— Opening narration
Advertisement:

The Starlost was a sci-fi television show broadcast on CTV in Canada and syndicated in the United States from 1973-1974, mostly remembered today for its Troubled Production.

The Earth was doomed. So they built the Earthship ARK, a Generation Ship 8000 miles long and carrying a collection of fifty-three biospheres, each populated with a unique culture, and launched it towards another star. But early in the voyage there was an accident — now the crew is dead, the ship is off-course, the biospheres (along with their cultures) have been isolated from each other for centuries, and their peoples have forgotten that they are even aboard a ship.

Devon (Keir Dullea of 2001: A Space Odyssey) is an inquisitive young man native to the Amish-like culture of Cypress Corners. In love with Rachel, he refuses to accept her Arranged Marriage to his friend Garth. His disruptive ways win him no love from the Elders of Cypress Corners, and eventually expand his world beyond anything he imagined: he discovers in one night both the corruption of the Elders and an access hatch to the rest of the ship. Fleeing the Elders through the hatch, he explores the ship and uses its library computer system to discover a disturbing truth: within five years the ARK will plunge into a star. Devon returns to Cypress Corners to warn his friends and family, but is tried for heresy and sentenced to be executed. Garth helps him to escape the night before his execution, and Devon convinces both Garth and Rachel to follow him into the ship on a quest to find both the backup bridge and someone who can pilot.

Originally an award-winning script for a miniseries by Harlan Ellison, it was changed into a series and was the victim of disastrous production problems and Executive Meddling, eventually causing Ellison to take his name off the project. For the complete, unvarnished story of what happened to the series, see Ellison's book Phoenix Without Ashes. For a comedic fictionalized version of the production troubles, see Ben Bova's novel The Starcrossed.

Despite the many problems during production and the show's initial lukewarm ratings, it has a following, and a DVD boxset was released in 2008.