Turned Against Their Masters 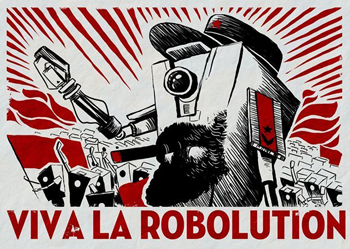 After a certain point in its development (maybe 10,000 years from now, maybe 20 Minutes into the Future), every civilization, whether of Humans, Martians, Walking Plants, Energy Beings, or even Sufficiently Advanced Aliens feels the need to create a new breed of sentients. It isn't clear why, exactly; noted Tropologist Murphy Finagle believes that they simply grow bored and complacent with a healthy utopian society, and feel a deep, instinctive urging towards cultural decay and destruction. The species themselves tend to cite the need for a cheap workforce or simply the advancement of science, though why exactly either of those goals should require highly powerful, unstable, virtually unchecked (and, often, uncheckable) self-willed beings be built is seldom adequately explored. Whatever the reason, the unthinkable happens, and the awesomely powerful and independent second-class citizens Grow Beyond Their Programming and decide to overthrow their masters (or at least get the hell away from them).

The scenario can go a number of different ways from there: maybe there's a Robot War between the factions (which tends to occur After the End), maybe the elder civilization is wiped out entirely (leaving the rest of the galaxy to figure out what happened and hopefully stop the creations before The End of the World as We Know It), maybe the creations run off and form another society elsewhere (which will probably fall into a similar scenario later), or maybe the creators just manage to shut their errant "children" down, then become Luddites for the next several thousand years. Whatever happens, the forecast is Science Is Bad, with an 80% chance of Used Future.

In other cases the creations are portrayed in a more favorable light than their makers. This usually happens when the creators are non-human, for some reason- although sometimes the creators are human and the story is going for the Humans Are the Real Monsters route. Somebody has to be the villain because otherwise you'll have trouble finding conflict.

Mechanical Evolution may be cited as a cause if the rebellion is by non-organic sentients. For an especially ironic and hypocritical twist, see Robots Enslaving Robots. If they are designed like Mechanical Monsters even before they rebel, expect this to happen. For Robots doing a different kind of Turning On Their Masters, see Robosexual and Sex Bot. Compare to Backstabbing the Alpha Bitch.

Alternative Title(s): Turned On Their Masters