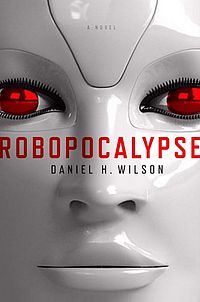 A 2011 Novel by Daniel H Wilson about how mankind brings the Robot Apocalypse onto itself. The novel is set 20 Minutes into the Future where mankind has automated just about every aspect of life to varying degrees. Everything from military equipment, domestic servants, cars, and even children's toys are robotic. The story starts off with a And Man Grew Proud moment that horribly backfires, leading to humanity fighting for its very existence.

A film version of the book was scheduled to be released as a Steven Spielberg film sometime in 2014, but was put on hold. On March 7, 2018, it was revealed that directorial efforts had shifted from Spielberg to Michael Bay.

A sequel novel, Robogenesis, was published in 2014.

The sequel, Robogenesis, provides examples of: