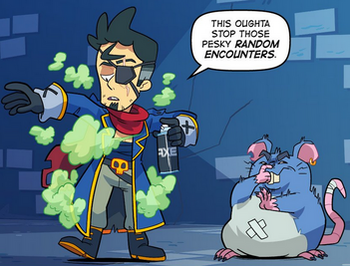 And any encounter, for that matter!
Advertisement:

A spell, item or other thing that reduces or eliminates Random Encounters in a Roleplaying Game or other game with encounters.

This is often used for timed areas (when the clock won't stop for battles), when a player has done enough Level Grinding and wants to get to the Boss Battle, or if the party is in danger (like low health and used up practically all healing spells/supplies) and needs to head to the nearest Trauma Inn or Save Point ASAP.

Heck, it can even work with some Pre-existing Encounters, by causing the monsters to shy away from you.

Contrast Encounter Bait (and some games will have both), Draw Aggro (getting enemies to focus on you).