Androids Are People, Too 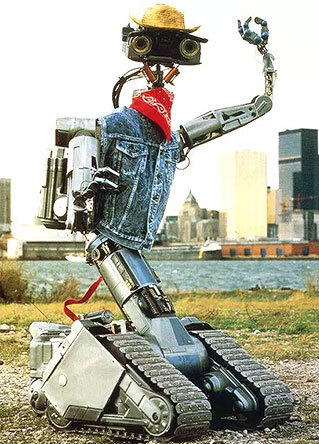 Hey, laser lips! Your momma was a snowblower!
Trunks: What you were doing was cruel, Pan!
Pan: What are you talking about? It's just a dumb machine!
Trunks: If he's scared to die, he must value his existence! His life might be different than ours, but if he's struggling to survive, then we have to respect that.
— Dragon Ball GT: Retold Saga, Chapter 4
Advertisement:

As we all know, Clones Are Expendable, Artificial Humans are abominations against nature, and robots are a crapshoot and undeserving of a second thought. It seems as though artificial lifeforms just can't catch a break in the world of fiction, all because they're Not Even Human. After all, What Measure Is a Non-Human?

A whole lot, in some cases.

In some stories, you might find that Clones Are People, Too, as are Artificial Humans. And those robots were just misunderstood.

With the world continuing to shift to being Pro-Artificial Life due to the increasing use of technology in our lives, there's no wonder that this trope is being used more and more in modern works. Take, for example, the evolution of the Terminator series. The first movie showed all A.I. as Killer Robots, while the sequels and spin-offs show that the eponymous Terminators may in fact be people too, at least when not under the control of Sky-Net.

The Sliding Scale of Robot Intelligence is a big factor here. Nobody's going to treat a 1970's digital watch as a person. If Data is at the other end of that scale, obviously there is a line between the two, but where is it and how blurry is it? On the other hand, A.I.'s might be based on a radically different technology than simple machines, making the line clearer: Isaac Asimov's positronic brains were not computers in any conventional sense (although Asimov himself disliked the idea of treating androids as people, rather than complex tools... aaand then he wrote "The Bicentennial Man," where Andrew the robot's status as equal to any human is the whole point).

Any series that uses the term "humaniform robots" (or something similar) usually has this trope applying to those specific human-like robots to which that term applies.

Ironically, the trope is partially (and perhaps unconsciously) subverted in cases where Ridiculously Human Robots are the protagonists or antagonists: many times, the main difference between the artificial humans and biological humans is some obvious physical artificiality (such as a glowing marker on their head, transparent body parts, barcodes on their bodies, or digitized speech) to communicate that they are "artificial," typically to make an analogy to something like the Jews wearing the Star of David or migrant workers carrying green cards as well as The Law of Conservation of Detail. Very rarely will you see a "robot civil rights" story use non-android robots because it's too difficult to get audiences (and even writers) to take seriously something like a sapient toaster or drone demanding equality.

This is related to Clones Are People, Too, and is generally found on the enlightenment side of the Romanticism Versus Enlightenment scale.

See the related What Measure Is a Non-Human? and Death Means Humanity. See also/compare the Zombie Advocate. Do Androids Dream? is when this trope is called into question, and Just a Machine is when the answer is declared to be "no."

Also, this isn't about the operating system. That is, unless someone's managed to give smartphones and tablets human-level sentience.