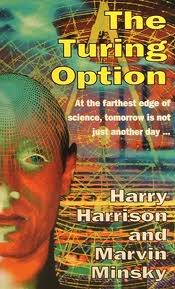 I'm half a person, half a memory. And I am beginning to believe that I am something not quite human either. Look what they took away. First my life ... than my humanity.
Advertisement:

The main character, young anti-social math genius Brian Delaney, has just finished a project aiming to develop a true artificial intelligence. Then he's shot at the lab, suffering severe brain damage; the AI is stolen, and no one else at the company understands Brian's notes well enough to reconstruct it. A friend and associate, Dr Erin Snaresbrook, makes a risky attempt to save Brian's life by replacing destroyed neural connections with electronic ones. While the police and the military search for the people responsible, Brian works to reconstruct his memory and rediscover his breakthrough, eventually finding that he can communicate with the main processor inside his brain just by thinking about it.