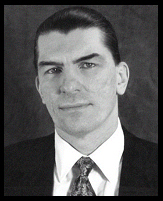 NOT Sylar or Norman Bates (but nearly as scary).
Jim was very good at being the boss...Coming from the Mort Weisinger school of Screw 'Em If They Can't Stand The Heat...Jim made deals and threw money at people who couldn't stand him. He routinely bought big-ticket Christmas presents for staffers he knew were plotting behind his back. He didn't care about being the heavy: somebody had to be the heavy. But, for Marvel to survive and grow, the kids would have to grow up. And Shooter became the avatar of our painful adolescence.
— Christopher Priest (comics)
Advertisement:

James "Jim" Shooter (born September 27, 1951) is a American comic book personality. A divisive figure, he is known both for his work as a writer and editor, and for the controversies surrounding him.

Shooter began his career at the age of 13 after a script for Legion of Super-Heroes he sent to DC Comics was accepted by the famous DC Editor Mort Weisinger. Weisinger eventually invited the young Shooter to New York and impressed with his talent put him to work at the age of 14. His run helped to modernize the series, most notably by causing the death of Ferro Lad, the first Legionnaire to be Killed Off for Real. He eventually went to work for Marvel Comics, writing among other things The Avengers. One of his most notable stories there was The Korvac Saga in which a supervillain gains cosmic powers but decides to use them for the good of the universe; however, an attack by The Avengers (who were not aware of his motives) ruined his plans, leading him to commit suicide, an unusual Downer Ending for such stories at the time.

Shooter eventually became an associate editor, then rose to the position of Editor-In-Chief at Marvel in 1977, at the age of 26 (which is actually on the older side when one considers that Stan Lee's first turn as EIC in the Timely era was at 19 years of age and Gerry Conway, Shooter's predecessor was in his early 20s too). Up until then, the editor-in-chief at Marvel was expected to personally edit the entire line, which resulted in high turnover and a laissez-faire approach to editing. Shooter managed to talk his bosses into letting him restructure the editorial department by hiring a staff of editors, each with their own portfolio of titles, with Shooter as the (as he sometimes referred to himself in the credits) "Big Boss."

As EIC, Shooter was committed to getting issues out on time (a major problem for the company earlier in the 1970s), and that meant a heavy handed approach and command of his staff and pressure on writers and artists. This needless to say did not make him very popular among his co-workers. He also banned writers from editing their own comics, with even Shooter himself submitting his work to a staff editor; this led to conflicts with veteran creators like former EIC Roy Thomas, who had been accustomed to doing both jobs. Jennette Kahn, the new publisher of DC Comics, took advantage of this dissatisfaction to woo many of those disgruntled talents like Thomas, Steve Englehart, Marv Wolfman and George Pérez to her side to jumpstart her company's competitiveness.

Shooter did make positive innovations, such as providing royalties for writers and artists of Marvel for the first time, even if as the face of Marvel, he became a popular target in the period of the creator's rights movements when Jack Kirby wanted the return of his original art (which Shooter negotiated on his behalf).

Some of his notable works in that position include:

Despite his writing talent, Shooter came to gain the enmity of some writers, artists and editors at Marvel, reportedly because of his authoritarian way of running things (most infamously John Byrne, who purportedly held a party where Shooter was burned in effigy after his old boss's eventual sacking). It's notable how several of his stories were later attacked and parodied after he left the company: The Beyonder was revealed to not really have been an omnipotent being after all; Korvac was now Evil All Along; and the New Universe was reinvented in a Darker and Edgier form, with the hero of Star Brand being to blame for it, and Shooter's hometown of Pittsburgh being destroyed. All of these seem to be a series of Take Thats aimed at Shooter, done regardless of their effects on the characters (or their fans). An overt one on the DC side in Legends (written and drawn by folks who defected from Marvel because of him) involves an Expy of Shooter (and Star Brand) getting his ass kicked six ways to Sunday by Guy Gardner, with the Expy almost-literally shooting himself in the foot. The pressure eventually lead to Shooter being fired from Marvel.

After trying to buy Marvel (and missing the bid by less than 2 million), Shooter decided to move on from the Big Two for a while. For his own part, Shooter has opined in interviews years later that he had difficulty finding work in comics at the time because his reputation had been tarnished so badly in the press that nobody would hire him (according to Shooter, Wizard magazine in this era would habitually reprint any first-hand gossip they could get from disaffected former Marvel employees with an axe to grind without any further investigation). Shooter found himself working as a writer of children's non-fiction, but remained keen to continue working in comics and soon decided to get back into the business. The experience of trying to buy Marvel led him to realise his ability to raise substantial amounts of capital very quickly and, assisted by former Marvel employees with whom he remained on good terms and contacts he had made in the publishing business immediately following his departure from Marvel, he decided to set up his own company.

After an attempt to buy Harvey Comics went nowhere, Shooter and his partners established Valiant Comics, which successfully modernized several old existing characters licensed from Gold Key Comics and continued Shooter's emphasis on characterization and continuity. It was successful for a time, even pioneering several marketing tricks and techniques (collectable coupons given away with issues which could be exchanged for a free exclusive comic, variant covers by "superstar" artists, holographic and holofoil covers, "zero" issues etc.) which earned it considerable attention in the burgeoning collectors' market and earned both the company and Shooter himself several industry awards. However, internal politics resulted in Shooter being ousted from the company after a couple of years and, after an ill-fated crossover with Image Comics and a corporate takeover and poorly-handled reboot, Valiant eventually closed down (and would be rebooted in 2012). Shooter tried a few more times, founding Defiant Comics and Broadway Comics, but without success.

In 2008-2009, Shooter was hired to write Legion Of Super-Heroes again—however, he was dismissed soon after, because (according to him) DC Comics did not like the direction he was taking the story. He was also attached to a short-lived Dark Horse Comics revival of Mighty Samson, Doctor Solar, Turok and Magnus Robot Fighter, old Gold Key Comics characters the last three of whom had previously been licensed to Valiant in its early years.

. For the best part of two years he updated almost daily with entries about his experiences in DC Comics, Marvel Comics and other companies, anecdotes and homages to legendary comic-book writers and artists, comic-book reviews... but updates eventually stopped.

While Shooter continues to be controversial, some recent comics scholars and fans have actually revised their opinion about his time as EIC, with many feeling he was rather overly blamed or scapegoated, and trying to balance the bad with the good.

Comic-Book series and characters which Jim Shooter worked on:

Storylines written by Jim Shooter with their own tropes page: