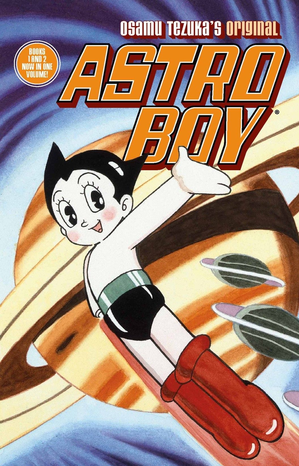 Soaring high in the skies...
Advertisement:

Osamu Tezuka's Astro Boy, called Tetsuwan Atom ("Mighty Atom" or literally "Iron Arm Atom") in Japan, began life as a manga that was serialized in the magazine Shonen from 1952 to 1968. It has been brought to television as an anime three times, in 1963, 1980, and 2003. It's a historically significant series, as Tezuka's style defined the look of iconic anime and manga, and the English dub of the 60s show became one of the first popular anime in America.

In the unimaginably distant future year of 2001, Dr. Tenma, of the Ministry of Science, loses his son in an accident. Half-mad with grief, the roboticist creates "Tetsuwan Atom," a rocket-powered android in his late son's image, and programs him to be a "good little boy." After a series of tragedies and misadventures, including abandonment by his "father," Atom is rescued and adopted by Dr. Ochanomizu, and decides to take up crime fighting. This decision soon leads him into all manner of danger and excitement, as he battles mad scientists, evil aliens and giant robots.

Tetsuwan Atom/Astro Boy is something of a cultural phenomenon in Japan; the character is virtually a folk hero. For example, on April 7, 2003 - the date of Astro Boy's "birth" within the show - the third TV series debuted and celebrations were held all over the world. The largest, of course, were in Japan, but even across America and Europe Japanese neighborhoods threw parties to commemorate the event. A commemorative plaque stands in the Tokyo district that the manga identifies as Atom's birthplace.

The third TV series inspired two video games, Astro Boy: Omega Factor, released first, then later a second game was released for the PlayStation 2. A CGI movie produced by Imagi Animation Studios was released in October 2009, also bringing to the table a movie-based game that spanned several consoles. In early 2011, an iPhone/iPod game called Astro Boy: Tap Tap Rush was released, first in Japan and then later in the US. For a video game series that was directly inspired by this franchise, see Mega Man (Classic).

Thee series also had a couple of popular unofficial spinoffs— Naoki Urasawa's Pluto, which was a reimagining and Perspective Flip of the "The Greatest Robot on Earth" arc, and Tetsuro Kasahara's Atom: The Beginning, which serves as a Prequel and shows how Dr. Tenma came to the point of creating Astro.

The Astro Boy manga provides examples of the following tropes: