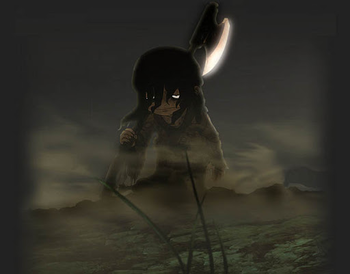 An eight-year-old axe-wielding kid.
"There are still occasionally throwbacks like "Asura", though, where animation doesn't just allow it to be amazing to look at, but means you don't have to put a child actor in the title role. Because, man, who would want to subject a kid to being a part of this?"
—Jay Seaver of eFilmCritic

1460. Japan. The Kanshō famine and drought have turned the place into a wasteland, and with it, its people into animals. During this period, an infant was born to a hungry woman. Hunger and desperation have turned the woman to cannibalism. Initially, she nurtured the little boy under harsh conditions. But finally, hunger won out and she decides to eat the infant, barbecued. Through a miracle, the boy survived with the image of his mother trying to eat him.

Fast forward to eight years later. The little boy is now an axe-wielding cannibalistic animal, preying on weak children. One day, rain comes a small village for the first time ever as the little boy spots a Buddhist monk crossing a bridge. The boy attacks the monk, but the monk evades the attacks while praying. The boy fainted, so the monk decided to take him in, to "teach him the ways of humans". The monk also gave the boy a name: Asura, due to the beast that resides in his heart.

Created by the (in)famous George Akiyama in 1970, it is first of his highly controversial works in Japan due to its feature of cannibalism.

Adapted into an animated movie by Toei Animation in 2012, directed by the director of Karas and Tiger & Bunny, Keiichi Sato. Showings are limited to adults for obvious reasons.

Compare Berserk for a similar exploration of human nature.

Not to be confused with a similar named game, or a different anime, a China-made epic movie