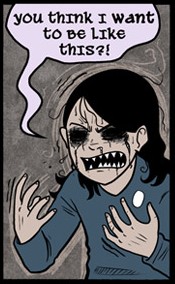 "Monsters are tragic beings. They are born too tall, too strong, too heavy. They are not evil by choice. That is their tragedy."
— Ishir⁠ō Honda, director of Godzilla (1954)
Advertisement:

Mostly, a monster is something like what we call evil, and it has a plan and wants to inflict pain. Either that, or it operates on a value system completely alien to ours, and inflicting pain is a completely unimportant by-product. Sometimes, however, it is just as unable to comprehend itself as you are, and it's filled with pain, horror, and disgust for itself. It just wants to be put out of its misery.

What happens when a monster must scream, but rather than being trapped with no way to fix it, they can (and do) lash out. They may be trying to get help and not understand that they're hurting people, or they're trying to provoke someone into killing them, or they just want everyone else to feel as bad as they do. They'll eventually meet The Hero who fights back and releases them from their pain (if they get a happy ending — living on like this is a much worse fate). The hero may or may not realize after the thing is dead that he just did it a service.

Not to be confused with a monster which is being tortured by some other entity.

Prone to Cry for the Devil, Alas, Poor Villain, Apologetic Attacker, and Mercy Kill (on the receiving end). The Monster from Beyond the Veil varieties of Came Back Wrong can be this; can also be the end result of The Punishment. Often found in a Tragic Monster. This is not just a mutilated or disgusting thing that wants to die — it must be able to do damage.