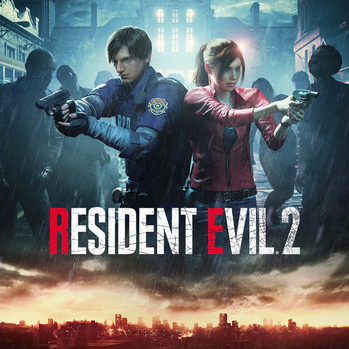 The second nightmare has been remade, you must survive once again.
"This is not how I imagined my first day."
— Leon S. Kennedy
Advertisement:

Resident Evil 2 (Biohazard RE:2 in Japan) is a Survival Horror game by Capcom. It was released for the PlayStation 4, Xbox One, and PC on January 25, 2019.

A remake of the original Resident Evil 2, the game was built on the RE Engine used by Resident Evil 7: Biohazard, and features a similar photorealistic graphic style and user interface, but with a third-person camera similar to Resident Evil 4. It is mostly faithful to the original game, but alters the environments, puzzles and lore in many different ways. The A and B scenarios system was dropped, with each character instead having a singular campaign that amalgamates lore from that character's A and B scenarios. A new "2nd Run" game mode was included; unlike the B scenario of the original, this mode has no story differences to a character's default campaign, but instead shortens the playthrough time required and adjusts the presence of items and the answers to various puzzles.

After the massive success of the remake, Capcom released a free DLC campaign on February 15, 2019, called the Ghost Survivors where you take control of Robert Kendo, Katherine Warren, and an USS soldier codenamed Ghost with their own What If? scenarios, with an unlockable mode for playing as Sheriff Daniel Cortini attempting to hold out against the zombies besieging a gas station.

On March 2, 2022, it was announced that the game will be brought to the PlayStation 5 and Xbox Series X|S, with existing owners of previous generation versions eligible to upgrade for free. The PC version will be updated as well to take advantage of newer graphics hardware. The new versions and the PC update were released on June 13, 2022.

The remake provides its own unique examples of:

In the Real-Time Fandub version of Resident Evil 2, the hulking Mr. X is turned into an obsessed angry librarian chasing the heroes, because they all have overdue books.

In the Real-Time Fandub version of Resident Evil 2, the hulking Mr. X is turned into an obsessed angry librarian chasing the heroes, because they all have overdue books.