Video Game / Remnant: From the Ashes 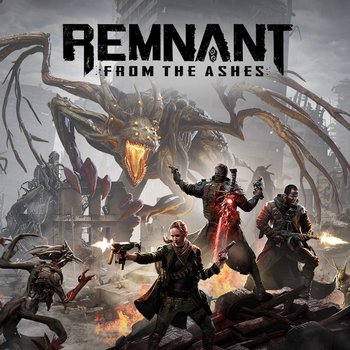 Evil never dies. Neither do we.
You think it's dead. It's not.
You give it all you've got. It's got more.
You pause to think. It won't.
Prepare to fight the Root of all evil.
Launch Trailer
A horrid mass of beings known as the Root have taken over the world, wiping out a majority of humanity and forcing the rest to fight to survive. Life, no matter how cozy, is always on the edge. One raid of monsters alone can reduce the most guarded havens into a pile of rubble. Ward 13 is one such haven. While still standing, it has no shortage of troubles. Your character is a stranger that washed up on the shores outside of Ward 13, looking to reach a tower after the champion of their homeland went missing. Hoping to finish what their champion had started, the Stranger assists Ward 13 and other NPCs with survival. And maybe — just maybe — they can drive out the Root for good.
Advertisement:

Remnant: From the Ashes is a Third-Person Shooter with procedurally generated levels by Gunfire Games, which can be played with up to 3 people total. It's heavily influenced by FromSoftware's Dark Souls and Bloodborne, from Story Breadcrumbs lore to health being a resource that needs to be managed, to even the weakest enemies being able to punish sloppiness, all while still remaining its own game. One big difference as far as Soulsborne influences go, is that the dungeons you need to go through are procedurally-generated; while the map is shaped to follow a specific questline, it consists of fixed storyline locations mixed with random pathways and dungeons. Events and side-quests in one playthrough may not be present in another, and even entire enemy types may be absent. You will require multiple playthroughs to collect all weapons, armor, accessories, modifications, and even character talents, let alone the materials required to enhance your weapons and armor to +20.

Outside its Soulsborne influences, it is still very much a third-person shooter. Melee combat is punishing if pushed too often, and is more for suppressing a group of small enemies or stun-locking one medium-sized enemy. There seem to be enemies in every area that discourage you from going full melee in one way or another, such as Action Bombs or stun-resistant tanks, while combat zones feature include thick cover and mooks to harvest ammunition from. You get two guns slots to this end, as well as a melee slot to let you choose your flavor of melee, one pistol, and one "long gun" that covers larger guns like rifles or shotguns. 'Magic' comes in the form of ranged weapon mods, which gain power as you deal damage, especially with the weapon it is attached to, and can cast a spell, switch to an alternate firing mode, or automatically activate under specific conditions.

In September 2020, THQ Nordic announced an overhauled version of Chronos named Chronos: Before the Ashes that serves as a Prequel to the game for release in December 2020.

Fill out the tropes: Remnant From the Ashes: