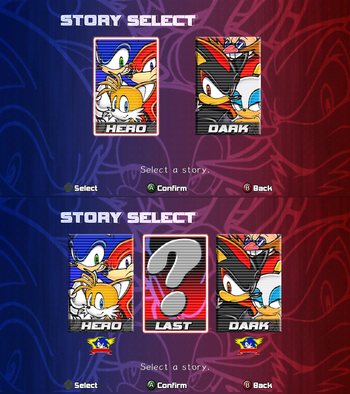 Thought you were done with the story? Think again!
Advertisement:

In a fair amount of cases, their stories are obviously connected. For others, not so much. Most people are likely to play through one character's campaign. After beating the game with that character, they will move on to another to look for the connection. What do you think would happen if you were to beat every character's campaign?

If you took your time to do so, you may be given one more campaign to clear. This campaign has the protagonists of the other campaigns brought together for one true final showdown. You could be using all of the characters you have played as back to back, or you could be using just one of them. In any case, you haven't beaten the game just yet.

In some cases, you actually have to do more than just clear every character's story. These requirements may vary between games, but most games that have an unlockable final story will often have it unlock just by beating the game with everybody.

Sometimes, this final campaign can have Multiple Endings. Which ending you get depends on what you choose to do in the final campaign.

This will often result in the True Final Boss coming into play. Compare Omega Ending, which involves unlocking a game's true ending by getting all other endings, but not involving multiple campaigns. Related to Unlockable Difficulty Levels, where you can play the same campaign in a harder level after beating it once for the first time. Not to be confused with Post-End Game Content, which would come after clearing the final campaign in this scenario.

Due to the nature of this trope, spoilers will not be marked.