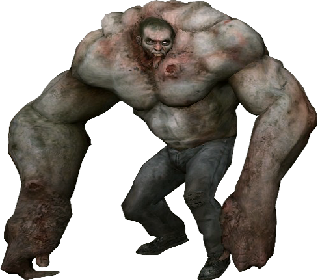 Okay, a Zombie Apocalypse is cool and all, but the audience is getting tired of the usual zombie, shambling and shuffling and moaning with no variation in their tactics or dramatic potential. So, what does a writer do? Why, give the zombies superpowers, of course! Yes, this very specific combination of Our Zombies Are Different and Elite Mook. When regular zombies aren't enough, they give the zombies special abilities.

These can include strength, stamina, speed, intelligence (from Artificial Stupidity to normal human to Artificial Brilliance) to more esoteric Magic and Powers, such as ranged attacks, usually in the form of bile or acid for the disease and horror theme, the ability to leap huge distances and cling to walls and ceilings for drop scares, and fangs and claws for deadlier melee attacks.

There are a number of recurring elite zombie types used in various zombie media:

This is most common in Video Games to add variation in combat.

Hawkings are a type of zombie notable for being smarter than usual zombies, capable of figuring out obstacles that normal zombies cannot.

Hawkings are a type of zombie notable for being smarter than usual zombies, capable of figuring out obstacles that normal zombies cannot.