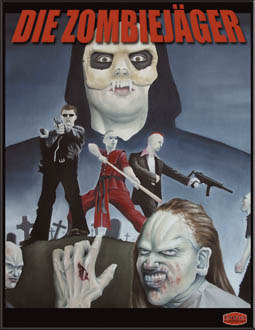 Die Zombiejäger (german "The Zombiehunters") is a Swedish zombie-action-comedy film about how a sorcerer tries to create an army of zombies by infecting Gothenburg's milk supply. To solve the problem the mayor of Gothemburg hires a group a German mercenaries, Dieter, Heinrich and Ivo, specializing in zombiehunting, as they fear the Swedish army will cause too much destruction. While the germans kills zombies, the sorcerer tries to transform a Italian hitman into a "super-zombie". The dialog of the film is humorusly dubbed into German, with the Swedish characters speaking "Swenglish" and the film heavily uses Jitter Cam.

It's notable for being the second Swedish feature lengh zombiefilm ever made and the first to be released outside of Sweden (in the U.K. and Italy). There is also a Big Budget Beef-Up prequel: Dragonetti The Ruthless Contract Killer.