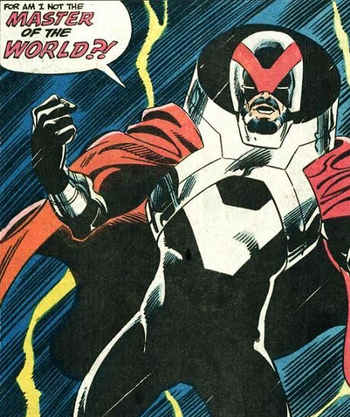 "I am the Master. I don't have to answer to you."
The Master: I like it when you use my name.
The Doctor: You chose it... Psychiatrist's field day.
— Doctor Who, "The Sound of Drums"
Advertisement:

Beware of any character whose name is simply "The Master". They're often in charge of things (duh) but most often these things include a reclusive mansion in the middle of nowhere, or a castle, or a laboratory, or all three! If they don't rule on the periphery of civilization like an old-school noble, they may rule right under our noses in civilized society. Whatever they're up to, expect them to have a big mustache, a great dining hall, and any number of Evil Plans.

Note that characters who have a name to go with "Master" are exempted from this — for example, Master So-and-So who teaches martial arts. Often a student will simply refer to their teacher as "Master", but that's also an exemption.

See also Names to Run Away from Really Fast, Spell My Name with a "The", Just the First Citizen.

Not to be confused with the Paul Thomas Anderson film (though the Master in that does fit the theme to a degree), or with the TV show Master Ninja (also known simply as The Master), or the similarly named trope Old Master.