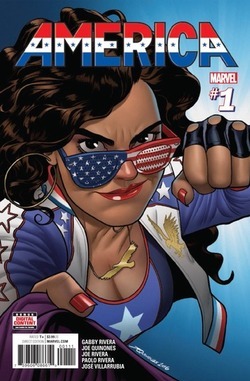 America is a 2017 comic book starring the eponymous America Chavez. America is a queer Latina superhero, who's been on multiple hero teams and saved countless worlds. But now, she's hanging up the cape to focus on her studies at Sotomayor University.

Unfortunately, danger is always around the corner. And it seems to be specifically targeting her. To make matters more complicated, America is dealing with a break-up, the evolution of her powers, her own past, her flaws, and a mysterious ally in the form of a woman called the Madrimar. Luckily for her, past team mates and old friends are there to help her figure things out.

The series is written by Gabby Rivera.