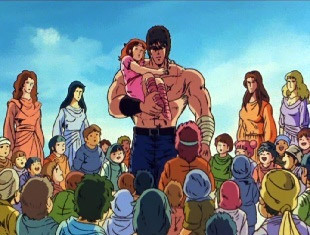 There's a reason Kenshiro is known as "The Savior of Century's End."
"And the reason that she loved him was the reason I loved him too.
And he never wondered what was right or wrong. He just knew."
— David Crosby and Phil Collins, "Hero"
Advertisement:

Bob is a hero.

Scratch that. Bob is the hero.

He fights with honor — he never kicks opponents while they're down or uses dirty tricks to win a confrontation. If he takes to the battlefield, he fights with appropriate force and despairs having to see any bloodshed. His goodness is genuine, not some con, and he will always make the right choice even when people would never know he made the wrong one. He looks out for the little guy, stands up for what's morally correct, and serves as the role model for heroes — being their standard-bearer, in many ways — and as a beacon of character for villains — even prompting some of them to give up their immoral ways.

The Ideal Hero is seen quite often in children's media. Oftentimes, the Ideal Hero in such stories will get rewarded, and plentifully so, for being a good guy through and through. What's more, he never struggles with himself, being The Hero from sunrise to sunset.

In stories for adult audiences, things are not that simple. Usually, the Ideal Hero does what he does because it's the right way to live. He gets rewarded for it less often (sometimes far less often) than not. What's more, he may even struggle with himself to make the right choice — but always (or almost always) makes the right choice in the end.

When executed poorly, an Ideal Hero can exemplify any of an array of the worst of good guy tropes, like Stupid Good, Lawful Stupid, and — in the worst cases — even a Knight Templar who refuses to allow any deviation from his strict moral code.

At one time, probably a Dead Horse Trope, but the Ideal Hero has been subverted and deconstructed to the point that it's experiencing a quiet resurgence of popularity, mostly as a Reconstruction, but sometimes simply played straight.

One more interesting aspect is that they are Born Lucky which lets them be a All Loving Hero who often inspires others to do good deeds. Which also means they are a Born Winner. See also: Black Hole Sue, where they use their charisma to calm down people, inspire people and save society to create a Utopia.

May overlap with Incorruptible Pure Pureness. Sub-Trope to The Idealist. Super-Trope to All-Loving Hero, The Cape, Knight in Shining Armor, and Captain Patriotic. Almost always a Humble Hero. While The Hero is often an Ideal Hero, the former is the role a character occupies in a group while the latter is a character personality. See also Standardized Leader. Contrast Anti-Hero, a hero with character flaws, and Complete Monster, a villain who is pure evil. Can overlap to some degree with one of either Martial Pacifist, Technical Pacifist, or Actual Pacifist.