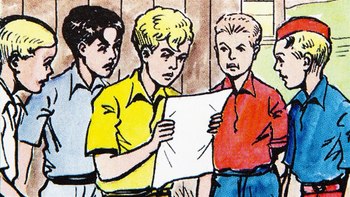 Rychlé šípynote "Fast Arrows" - habitually translated as "Rapid Arrows", in a Czech misunderstanding of the English usage of the word "rapid" is a 20th-century Czech magazine-published comics series, directed at children and teenagers. It features a club of five boys named, of course, Rychlé šípy. It is probably the comics if you're Czech, the old golden standard every other comics will inevitably be in some manner compared to (if only to say it is nothing like it) - and it introduced the unique flavour of "club comics" to the Czech scene.

It was originally (from 1938) published in the magazine Mladý hlasatel ("Young Herald"), and intended as a fun edifying and educational tool, especially as an inspiration to the reader clubs connected to the magazine. It was - just like the clubs themselves - the brainchild of the writer, and Scout leader, Jaroslav Foglar. The two most prominent artists were newspaper cartoonist (originally lawyer) Jan Fischer (between 1938 and 1948), and illustrator and musician Marko Čermák (a Promoted Fanboy, during the comics' revival in the wake of the Prague Spring). A few other artists filled in for Fischer a couple of times for a couple of issues/pages. Fischer's versions of the characters are the most iconic, and he captured the town sceneries well, while Čermák relished (and still relishes) drawing natural sceneries.

Rychlé šípy are an intentionally idealised group of teenaged boys who always try do the right thing, help the elderly, never utter vulgarities, etc. They also sometimes solve mysteries because what young heroes of this kind don't? Many of the stories are only single- or double-page, although there is also a number of longer arcs. The majority is adventurous or depicting events intended to edify the readers, but there are also some comical ones.

Despite featuring five main characters, Rychlé šípy are not a Five-Man Band - they're just too good to fill all the required roles... The members of the club are:

The characters are also featured in three novels written by Foglar, the so-called Stínadla Trilogy dealing with the mysterious town district of Stínadla ("Shades", but also with "beheading" undertones in Czech) and its secretive and belligerent society of children, the Vonts. In these books, Rychlé šípy venture into Stínadla in order to unravel its mysteries. The first two books were originally published in serialised form in the magazines publishing the comics at the time; the third was first published abroad and then in Czechoslovakia after the Velvet Revolution in one volume with the first two. The books are:

All three books were also adapted into comics form, with Marko Čermák as the artist.

Due to the 20th-century political upheavals in Czechia, the publishing of Rychlé šípy was stopped several times for varying lengths of time, what with Those Wacky Nazis having no use for the independent reader clubs, Dirty Communists perceiving comics as the Western imperialist medium and likewise frowning on independent organisation, and Foglar's Scouting-influenced morality not suiting either of those groups. In a twist of fate, however, this may have only served to introduce new generations of fans to a work that might have otherwise run to the natural end of its course much earlier, and turned an undoubtedly influential comics into a downright iconic one.

In 1998, the publishing house Olympia published all the stories in a single omnibus book complete with detailed explanatory sectionnote Foglar died a year later, in 1999, so they still managed to get a foreword from the author, too. - which book, just like the comics itself, then became the standard to which such efforts are being compared in Czechia.

There has also been a TV series, a film, radio plays, and theatre productions. Rychlé šípy also feature in a couple of songs (which apparently Foglar was quite happy about). As well as parodies.

The Stínadla books in particular have really entered public consciousness, and have as a result practically entered the public domain with no regard to the actual law involved: Several authors have written continuations of them which break the usual rule that Ascended Fan Fic has to be in some way reworked in order to be published - these are openly a continuation of Foglar's work, featuring at the very least the same settings and concepts if not the same characters, and some of them were even published while Foglar was still alive. There were also people actually creating their own real life Vont societies. And there are public games being run based around the concept of "finding Stínadla in your own hometown".

The comics provides examples of: