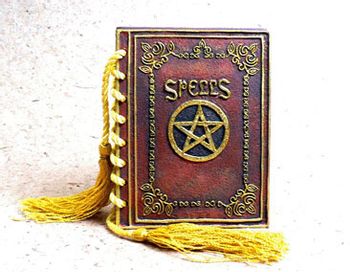 Barbie's First SpellbookTM: Comes with its very own athame!
Advertisement:

Spell Books are books with various magic diagrams and incantations, presumably spells, written in them. This is where the resident magic users go when they need to get serious but the spell was just too darn long to memorize. Or if they're trying to preserve magical knowledge and expect to be dead by the time said knowledge is needed. They may also be magic artifacts themselves, imbued with arcane potency, and magic is cast by wielding the book rather than by reading what is written in it.

In Real Life, the Spell Book is called The Manual and allows the user to cast "Tech Support" without use of reagents (although like its fictional counterpart, beware the person who thinks they're a wizard just because they read the book and are eager to try out the powerful incantations therein). In Sci-Fi, the Spell Book may be called by a number of names, but reading Techno Babble aloud from its sacred pages can produce limitless feats of technical wizardry.

People who practice Witchcraft call these things grimoires or Black Books. Also known as a Book of Shadows, they are usually more like commonplace books with collections of incantations, calendars, diagrams, recipes, journal entries, and notes on whether this or that spell worked.

Related to, but distinct from the Great Big Book of Everything which is an infinite source of information. The Tome of Eldritch Lore is also a spell book but has added implications of doom!.

Older Than Dirt, as the ancient Egyptians thought magic could be performed by reading and performing specific incantations, and used collections of written spells in various forms. Writing itself was considered a magic art. Compare and contrast Limited-Use Magical Device, a magical item that only has a limited amount of uses before needing to recharge or becoming completely unusable. Do not confuse with Throw the Book at Them, where the book is a weapon in and of itself instead of just a focus (though they can and do overlap).

When the spell intended to read a Pokemon's thoughts ends up turning Ash into a Pikachu, Lily looks back over her spell book, and finds there's another page to the spell...which has become illegible.

When the spell intended to read a Pokemon's thoughts ends up turning Ash into a Pikachu, Lily looks back over her spell book, and finds there's another page to the spell...which has become illegible.