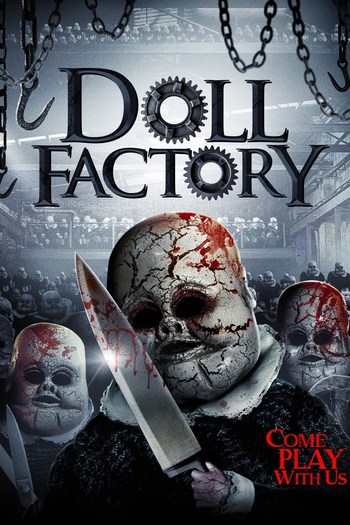 Doll Factory is a Horror Comedy movie by Stephen Wolfe.

One Halloween Night in a small Texas town, Kay (Nicole Elliot) brings her boyfriend Mark (Justin Herman) and her friends to an old abandoned toy factory to try out a spell book one of them found in her mother's belongings. After performing a ritual from the book with her friends there (the ones who didn't leave to have sex, anyway), nothing really seems to happen at first. So, they decide to just head out. On the way out, one of them finds an old baby-headed doll...

Only Kay and Mark manage to escape with their lives while everyone else has their souls harvested for their master. Kay and Mark decide to enlist the help of Kay's brother Melvine (Andy Palmer), and an old man with prior knowledge of the killer dolls, one Darius Grumley (Boo Gay), to undo the evil they've unwittingly unleashed.