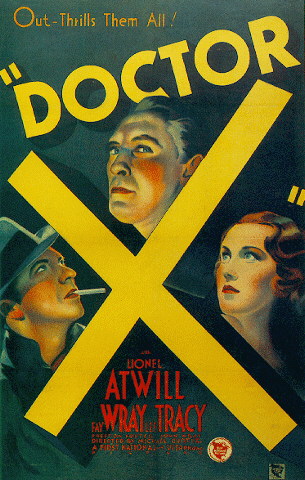 It follows New York newspaperman Lee Taylor (Tracy) as he covers the investigation of a series of full-moon murders in which victims are strangled, cut with a scalpel, and partially cannibalized. Evidence points to the Academy of Surgical Research, where five scientists — including the director, Dr. Xavier (Atwill) — have remained to continue their research while the students are on holiday.

Desperate to protect the reputation of his institution, Xavier strikes a bargain with the police: he will bring the suspects to his Long Island mansion and monitor their vital signs as they watch staged reenactments of the crimes. If he can discover the killer within 48 hours, his name and the Academy's will not be revealed to the newspapers in connection with the murders.

Lee will have nothing of this. He reports the story anyway, and secretly follows the investigation right to the mansion. Too bad Xavier's daughter, Joan (Wray), already recognizes him...

Doctor X was shot in both black-and-white and Technicolor; it was one of the last films to use the two-strip Technicolor process. The color version was believed to be lost until 1978, when a print was discovered in Jack Warner's personal collection. This, in its restored form, is now considered the definitive print, and for over 30 years was the only version of the film available until an HD restoration of the black-and-white version was included on the 2021 Blu-ray release as a bonus feature.

An In Name Only sequel, The Return of Dr. X, was filmed in 1939. It starred Humphrey Bogart.