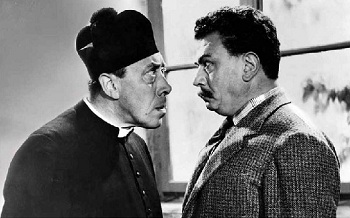 Don Camillo (played by Fernandel) and Peppone (played by Gino Cervi) in the 1950s-1960s films.
Advertisement:

Don Camillo is a series of successful and much beloved books, movies, TV shows and audio dramas about the enmity and friendship between a Catholic priest and a Communist mayor in a small town in post-World War II Italy.

The Don Camillo stories were written by Giovannino Guareschi starting in 1945 for his satirical magazine Candido, and soon afterward compiled into books. The series is originally entitled Mondo piccolo, referring to the "little world" of the villages and small towns in the Po valley near Parma. Most of the stories published in periodicals, and all of those that were anthologized into books, center on the hotheaded priest Don Camillo (who often talks to Jesus... and with Jesus talking back to himnote According to the author, the voice of Jesus is his (the author's) conscience.) and his eternal rivalry with Giuseppe "Peppone" Bottazzi, the communist mayor of his little town The town is not named in the stories, while in the films it is called Brescello after the one where the exterior shots were made. Both are authority figures for the town, both fought in the war together, and both like using their fists to decide their arguments. Most of the stories tell about the life in a small town, where everybody knows everybody, but many people do not like each other, which is pretty accurate as small towns go...

It is pretty much of a historical document of a time when both the Italian Communist Party and the Roman Catholic Church had a grassroots-like basis in Italian society but were diametrically opposed to each other in quite a few teachings, but if you went down to their basics they were quite similar in many respects. Even if neither would have never admitted it to anyone.

The Don Camillo stories present this conflict on a smaller scale: a small, rural town in the Po valley. Both sides are represented by Don Camillo and his parishioners on the one side, and Peppone and his communists on the other. Of course even the most staunchly communist party member in Peppone's band still is a good Italian Catholic, and even if they might decry the church at every possible moment, they still will come to Don Camillo for everything important (baptisms, funerals, weddings...). Don Camillo on the other hand is not as staunchly against the Communist cause as some of his wealthiest parishioners would like: he sees the reasons why poor people turn to communism, and he decries the greed and avarice of the rich catholic landowners. "I don't listen to you, you're a Bolshevik priest!" one of them says when Don Camillo does not immediately take his side.

Don Camillo and Peppone go back a long time, and they make a show of not liking each other, for political reasons. On the other hand, they both appreciate and even respect each other, and neither of them actually can live without the other. When don Camillo is Reassigned to Antarctica at the end of the first movie, Peppone tries to get him back. Even if Peppone would never admit to that.

All that plays out in front of typical small town stories: most of the stories are rather short, light reading; the movies are mostly collections of stories, weaving together the short tales from the books with meandering plots. But often they also provide a biting commentary on social ills of the time, with a healthy dose of humour.