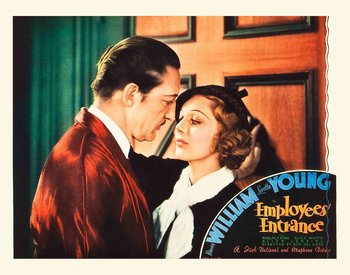 "When a man outlives his usefulness, he ought to jump out a window."
Advertisement:

Employees' Entrance is a 1933 film directed by Roy Del Ruth.

Kurt Anderson (Warren William) is general manager of the Monroe Deparment Store, a Macy's Expy in New York City. He is a ruthless, pitiless corporate shark, who drives his employees like pack mules and fires them at a drop of a hat. When he meets one Madeline Walters (Loretta Young), who is broke and on the edge of starvation, he gets her a job as a model at the department store...for the price of some sex.

Meanwhile, Anderson cans Higgins, the over-the-hill manager of the men's department. When Higgins jumps from the ninth floor of the department store to his death, Anderson barely blinks. He replaces Higgins with Martin West, a young go-getter who has a lot of good ideas. Anderson takes Martin under his wing and grooms him to be the next ruthless corporate shark, but what he doesn't know is, Martin and Madeline have gotten married.