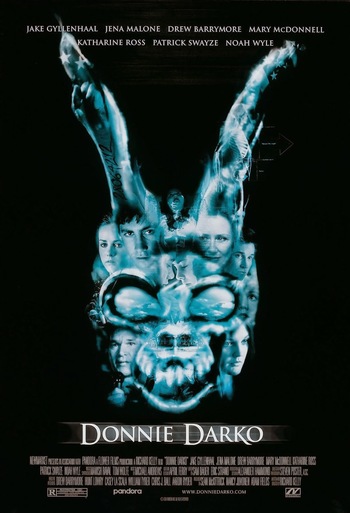 On October 2, 1988, troubled teenager Donnie Darko sees a figure in a demonic rabbit costume while sleepwalking. The figure introduces himself as "Frank" and tells him that the world will end in 28 days, 6 hours, 42 minutes and 12 seconds moments before a jet engine crashes into Donnie's bedroom. Donnie credits Frank with saving his life by causing him to sleepwalk out of the house, and begins to do his bidding while gradually trying to uncover the strange events around him, which may or may not be related to Time Travel, an alternate dimension, and/or his worsening schizophrenia in ways that still bear interpretation, analysis and confusion to this day.

The word-of-mouth cult following that the film grew led to Kelly being given the opportunity to create a Director's Cut, which released in 2004. It greatly alters the pacing of the film by adding deleted scenes and new digital effects as well as changing parts of the soundtrack and making more of an effort to explain some of the film's ambiguous elements. Kelly considers this version not really a director's cut but rather an "extended special edition", and fan opinions remain somewhat divided as to which version is better.

Rumors of a sequel have been vehemently denied by fans for years.

This plays during the first scene of the movie, the Youtube video being linked on top of the page as an example for how this trope plays out.

This plays during the first scene of the movie, the Youtube video being linked on top of the page as an example for how this trope plays out.