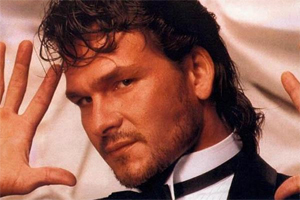 The only Chippendale who could put you on a hospital food diet for a year.
Dean: Nobody puts Baby in a corner.
Sam: ...Y-you know that's a line from—
Dean: (emphatically) Swayze movie! Swayze always gets a pass!
—Supernatural, "Slash Fiction" (S07, E06)
Advertisement:

To begin with, he was the product of a dance instructor and a rodeo champion. Plainly, his destiny as an all-American, ballet-dancing, Judo-kicking beefcake was written in the stars.

Swayze's career began as an understudy for Danny Zuko in a Broadway production of Grease, eventually leading to great deal of TV and film work. He was a peripheral member of the Brat Pack (mainly via his role in The Outsiders, alongside... well, pretty much every young male actor who made it big in The '80s).

His breakout role came as Orry Main in the North and South (U.S.) TV miniseries, followed by his iconic performance as Johnny Castle in Dirty Dancing. Its wild success ended up Typecasting the actor, which resulted in several flops, the most successful of which was (ironically) Road House.

His fame started to wane in The '90s, though he did make an incongruous appearance here and there, such as in Donnie Darko. Swayze landed a starring role in the A&E cop drama The Beast right before being diagnosed with pancreatic cancer, the only thing that would dare trifle with him. He died at age 57.