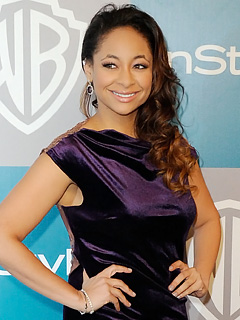 "Be very professional because it will get you a lot further. You have to treat people with the same respect whether they're signing your checks or cleaning up after you."
Advertisement:

Raven-Symoné Christina Pearman-Maday (née Pearman; born December 10, 1985), known professionally as either Raven-Symoné or simply Raven, is an American actress, singer-songwriter, rapper, comedian, television producer, and model. She launched her successful career in 1989 after appearing on The Cosby Show as Olivia and released her debut album, Here's to New Dreams, in 1993. Raven-Symoné appeared in several successful television series, such as Hangin' with Mr. Cooper in the mid to late 1990s. In 2003, she went on to star in the highly successful Disney Channel series That's So Raven, which launched her career to new heights. During her time on That's So Raven, Raven-Symoné released her third studio album, This Is My Time (2004), which went on to become her best-selling solo album to date. She transitioned to a film career, starring in several films aimed at teen audiences such as The Cheetah Girls, The Cheetah Girls 2 (in which she was the executive producer), and College Road Trip. Raven has also lent her voice to Kim Possible (for the character Monique) and films such as Tinker Bell (for the character Iridessa). She also owns a "how-to" video web site called "Raven-Symoné Presents".

In 2013, she announced via Twitter that she's a lesbian