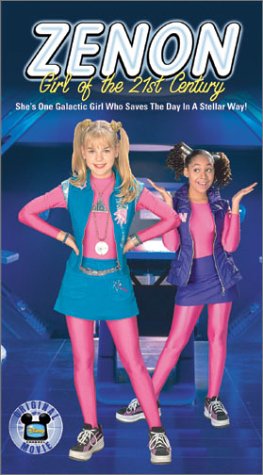 A Disney Channel movie first aired in 1999, Zenon: Girl of the 21st Century is set in 2049, where Zenon Kar (Kirsten Storms) is a 13-year-old who literally gets grounded as she is forced to leave her Space Station home and live on Earth. The first film concerns her trying to get along with some Earth kids while taking down a plot by Parker Wyndham to destroy the space station.
Advertisement:

Although it never became a series as expected, it did spawn two sequels. Zenon: the Zequel follows Zenon as she clashes with General Hammond and his military forces who are taking over operations of the station; to make matters worse, Hammond's daughter is Margie, Zenon's Alpha Bitch enemy from the first film. Zenon:Z3 focuses on Zenon as she enters the Galactic Teen Supreme contest, while Sage Borealis, a Moon preservation activist, and Selena, goddess of the moon, urge her to stop contest-holder Pat Numbar from colonizing and exploiting the moon.

Not to be confused with the Devilman villain.