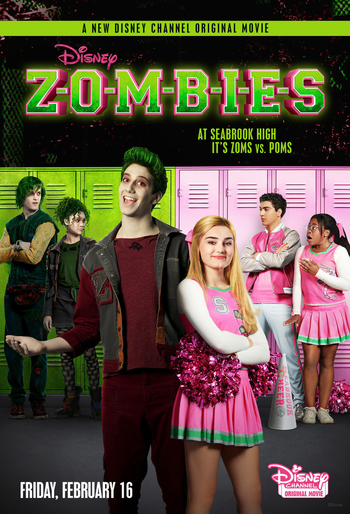 Which side are you on?
"I'm not a monster, I'm a Zombie. You're a cheerleader."
Advertisement:

Z-O-M-B-I-E-S is a 2018 Disney Channel Original Movie, based on the novel Zombies & Cheerleaders by David Light and Joseph Raso. The book was initially adapted into a television pilot in 2012, but after the series was not picked up it was reworked into a musical film. The movie premiered on Disney Channel on February 16, 2018. The film stars Meg Donnelly and Milo Manheim.

Z-O-M-B-I-E-S is set in the suburban and obsessively perfect town of Seabrook, a place filled with traditions, uniformity, and pep rallies—and also happens to have a zombie population living in the rundown Zombietown right next door. Thanks to high-tech wristbands that curb their hunger for brains, the zombies can have lives just as fulfilling as humans, but are hampered by various laws — especially an anti-difference law where everyone and everything have to be exactly alike — and prejudiced humans. The first film opens with students from Zombietown being allowed to take (segregated) classes at Seabrook High. When Zombie football player Zed and human cheerleader Addison fall in love, chaos ensues, and the two must lead their groups' to coexistence with each other. Sound familiar?

A sequel, Z-O-M-B-I-E-S 2, premiered on Disney Channel on February 14, 2020. It picks up a year later where, after a groundbreaking semester, Zed and Addison continue to steer both their school and community toward unity. But the arrival of a new group of outsiders — the mysterious werewolves — threatens to shake up the newfound peace and causes a rift in Zed and Addison's budding romance. It was followed by an animated short series, Addison's Moonstone Mystery, which began airing in October 2020. A second season, under the title of Addison's Monster Mystery, aired throughout October 2021.

A third and final film, Z-O-M-B-I-E-S 3, was released on Disney+ on July 15, 2022, with an "encore" edition (with extra scenes and a bonus song) set to air on the channel on August 12. Zed, Addison, and their friends are beginning their final year at Seabrook High in the town that's become a safe haven for monsters and humans alike. Zed is anticipating an athletic scholarship that will make him the first Zombie to attend college, while Addison is gearing up for Seabrook’s first international cheer-off competition. Then suddenly, extraterrestrial beings appear around Seabrook, provoking something other than friendly competition, which could also give Addison clues toward her true identity.

An animated spin-off series based on the movies titled ZOMBIES: The Re-Animated Series has been announced to be in the works.

Not to be confused with Zombies, another title for the 2006 movie Wicked Little Things, or the fanfic Zombies.