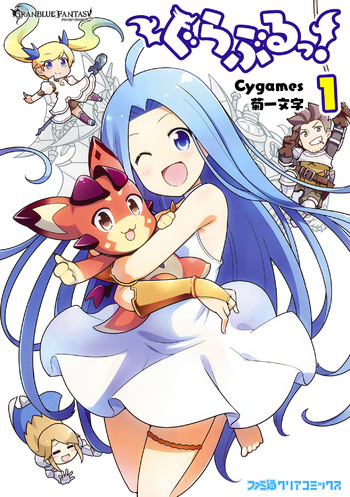 Grand Blues! (Guraburu! in Japanese) is the official webcomic/manga spin-off for Granblue Fantasy drawn by Kiku Hitomoji, written and published by Cygames. It is an ongoing Gag Series that focuses more on the comedic aspects of the RPG game's characters, with various hijinks pertaining to fourth-wall hints and breaks, lampshaded tropes, Deconstructions, Running Gags, Brick Jokes and numerous character-related exaggerations. Basically, it's Granblue with all the seriousness tossed aside for the sake of making fun out of the lore using alternate, chibi-fied versions of the characters.

The comic series is presented using a 4-koma format, with the first panel on top being fully-colored. Each new comic strip is usually tied to the currently-running story events or celebrations of the game. Although these are originally released in Japanese, Cygames also releases official English translations for the older comic strips by batch. This is freely-accessible from the main screen of the game. It was later printed into manga volumes.

Starting from the April Fools' Day event of 2017 onwards, this webcomic spin-off has been somewhat integrated into the story of the RPG game via the "Big Bad Shadow" event and its iterations, making the series a case of a parallel world wherein the comical alternate selves travel to the Skydom via portal cracks, interacting with the real crewmembers for the duration of the events.

that this webcomic series is having an anime adaptation within the same year, under the title of Guraburu!. Yep, despite the announcement being on April Fools, it was a real thing planned to be released on October 8, 2020

Like the browser game it is derived from, Grand Blues! should not be confused with Grand Blue.