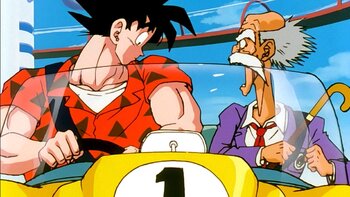 When a character needs to pass a road test to earn a driving license. Usually they are a teenager who is obtaining a driver's license for the first time in their life as part of the process of advancing to adulthood. In most North American societies it is a cultural norm to obtain a driver's license in the early years of adolescence, and the adult who doesn't hold one will be portrayed as a Manchild. More rarely, they might need to renew an existing license.
Advertisement:

Often, during the test, a danger occurs that forces the character to make emergency evasive maneuvers. This may impress the examiner enough to award bonus points in the evaluation for successfully dealing with a dangerous situation.

Alternately, the picky driving examiner will demerit the applicant for the most minor mistakes and fail them. Either the character will retake the test at a later date with additional encouragement and training from their friends, or they will invoke Rules Lawyer to pass.