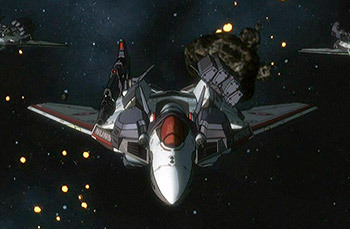 In essence, a spaceship that can take off and land like an aircraft, as well as also looking like an aircraft. Many ships have Vertical Take Off Or Landing (VTOL) capabilities; these babies, though, can use a regular runway too.

Saves you the cost of a space launcher that you only use once. The obvious technical issue is that you need a store of liquid oxygen on board for the actual space bit of the journey — as you need something to burn the hydrogen with once the air gets too thin. Another issue is the ability to get to Mach 25, but that's not too hard. Both of these are obviated by the Sci Fi favourite propulsions of fusion torches, antimatter annihilators, reactionless drives and what have you.

Please note that this list only include SSTO (Single Stage to Orbit) or to sub-orbit to qualify.note Mid-air refueling or drop tanks may or may not count. Nobody's built one, as of 2021. The most promising design so far is the Skylon,

a British-designed European project, which recently cleared a key hurdle in engine development. Therefore, the following are not space planes by the definition used here:

In some settings, the definition "must be able to take off, fly into orbit, and land again" may not entirely apply; the ship in question may be used in both atmosphere and space, but it might be unclear whether they can fly from ground to orbit. This definition wouldn't work at all in settings with multiple habitable worlds, as that distance changes. Space Planes may be launched by The Battlestar, descend into the upper atmosphere and come back up (or not), but may not be able to land on a terrestrial runway at all; many space fighters do lack wheels as a part of their landing gear. However, as previously stated, they may be able to use their thrusters in VTOL (Vertical Take Off and Landing) style.