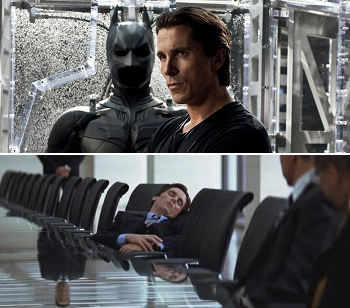 Anyone whose description is "Normal Job By Day, Crimefighter (or other things) by Night!" probably doesn't have a lot of time to sleep.

So we'll see them doing stuff during day and night — constantly. Don't they ever need to take a nap? No Sleep Deprivation? The actual physical consequences are rarely taken seriously, except maybe by showing a teacher or boss annoyed that the character is dozing off from time to time. Rarely anything else happens: if it is shown as a constant issue of exhaustion, it will usually be school or work that suffers, as opposed to their night-time adventures, even though being tired means they should have a much harder time fighting. Night is naturally the time for saving the world when you Wake Up, Go to School, Save the World.

Of course, one could assume that Evil doesn't strike every night. But it sure seems that way.

Not to be confused with Shapeshifting where one has three forms.