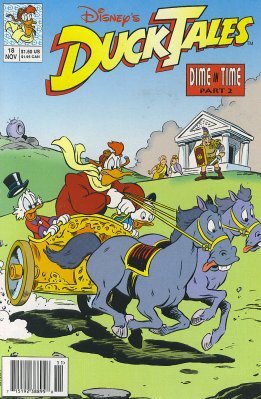 A series of comics based on the DuckTales (1987) animated series (itself based on the Disney Ducks Comic Universe). The stories had a similar plot to the original cartoon, with Scrooge and nephews embarking on adventures or causing trouble in Duckburg, along with the rest of the McDuck household: Launchpad, Gyro Gearloose, Mrs Beakley and the butler, Duckworth.

There were three series of comic books made by three publishers; the first was Gladstone Publishing, from 1988 to 1990 (when the show was still on air), which contained some adaptations of episodes such as "Armstrong" and "Jungle Duck".

The second comics book was published by Disney Comics, from 1990 to 1991, and contained several multi-part stories such as "Scrooge's Quest", "The Gold Odyssey" and "A Dime in Time". The title was cancelled in October 1991, due to Disney Comics implosion, but Disney continued to publish DuckTales stories in Disney Adventures issues from then through November 1994.

The third and last DuckTales comic book was published by Boom!Studios, when said publisher was reprinting some old DuckTales stories in its Uncle Scrooge issue. The title contained a four-part saga, Rightful Owners, and an unauthorized story that crossed over with the Darkwing Duck comics, which runs under Canon Discontinuity.

Tropes from the Disney Comics series:

Tropes in the Boom! version