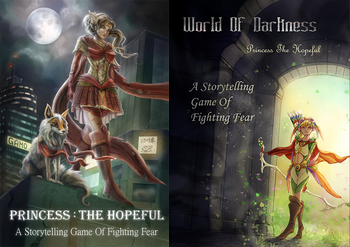 Bring back Hope to a World of Darkness.note Dream (left) and Vocation (right) versions
Advertisement:

A Storytelling Game of Fighting Fear.

Fan supplements for the New World of Darkness have always been a popular pastime among forum denizens of RPGnet. However, Princess: The Hopeful is unique in that it originated as a parody. Combining World of Darkness with the trappings and glitter of Magical Girl anime? Surely no one would be able to take it seriously.

Or so the original authors thought. The idea was deemed to have genuine merit, and after a Cerebus Retcon or two, ultimately Blossomed into a fan line with popularity rivaling that of Genius: The Transgression - a tale of what it means to be a living avatar of Hope and Light in a world where Despair and Darkness have essentially won. (World Of Darkness being what it is, there is little surprise in that the resulting concept resembles Sailor Nothing much more than Sailor Moon.)

It is also noted for being heavily inspired by Second Edition Exalted (the titular characters are both Reincarnations of heroes from long past yet separate people, Grey-and-Gray Morality, the general thematic of A World Half Full, social combat, etc).

Due to creative differences between the writers, there are actually two different versions of the game, respectively referred to as the Dream and Vocation versions. Aside from differences in tone and mechanics, however, the game mostly remains the same in concept and story.

Once Upon a Time, there was a great Kingdom, a paragon of happiness and stability to its people. Under the guidance of its Queens, it became very-nearly a Utopia, giving guidance to its sister states and the first line of defense against the All-Consuming Darkness, a mindless, cosmic force of sorrow, fear, and hunger. This was not a hard job. It was so easy, in fact, that over time, their light became self-righteous and insular, caring more for their vision of what was right rather than what was needed. This gave the servants of the Dark opportunity to form a plan.

Of the Queens, five were imprisoned in the Dreamlands, to avoid further interference. Two escaped, but not unchanged; the one now known as the Queen of Tears was able to save the city of Alhambra by shunting it into the middle of the Darkness, while the one called the Queen of Storms abandoned her own body as a possible weakness, becoming a living tempest of anger and vengeance to stop the Dark by any means. These, along with a mysterious individual called the Queen of Mirrors, became known as the Twilight Queens.

Thus, possibly in conjunction with the fall of Atlantis, the World of Darkness began, the dream-Queens and their servants completely unaware that Dreamlands were a never-fallen Kingdom, the Alhambrans draining Light from the world to keep their city alive, the soldiers of Storms reshaping themselves as the cybernetic part-spirit androids called the Goalenu, not caring who they had to hurt in their never-ending mission to eradicate the Dark. And the Darkness itself? It just continued on as it always had, consuming the world bit-by-bit...

Until the Apollo moon landings, that is.

For the briefest instant, the light of hope shone on Earth brighter than it did in the Dreamlands. The Queens saw this and, realizing that they had been deceived, mustered their armies and drove out the guards stationed in the Dreamlands by the Darkness. While it still exists, it is just a Dream Land now, with at least some inhabitants aware that it is just a simulation of the real world. While a few, known as the Amanojaku grew to envy the real world and decided to take flesh bodies by force, the captive Queens were able to send out their captive Light into the world, to find those worthy of rebuilding the Kingdom... without making their mistakes, hopefully.

The wiki can be found here

. There is a Discord server here.

There also is a Hunter-related supplement whose trope page is here.

The inborn splats of the game are refereed to as Callings, the ways in which a Princess is called to serve the cause of The Light.

open/close all folders
The Callings
The chosen splats of Princess are the eight Queens. When a Princess reaches the apex of her power she becomes a source of magic, like a colored mirror who not only reflects more of The Light onto the world but impresses her ideals onto it. If a Princess' beliefs align with a Queen she may draw on that source of magic in addition to calling on The Light directly, both to make her magic stronger or to move it in new directions. The Queens themselves are teachers, mentors, and moral exemplars who help define the ideals Princesses live up to. The five Radiant Queens were killed when the kingdoms fell. Their souls were trapped in the Dreamlands, and they have chosen to remain there after the release as they feel they can do more good as dead Queens than living Princesses. Though most Princesses swear to a Queen it is nearly universal to show some affinity for many Queens.
The Radiant Queens

The three Twilight Queens survived The Fall, for a given value of "survived." They are the moral flaws of Princesses taken to extremes, and yet their goals are noble. They offer unique advantages unavailable to the Radiant Queens, and many Princesses have been tempted to dabble in their dangerous magic.

And now it falls upon you to wield these tropes in the name of hope:

"You cannot live on hope alone. But without hope, life is not worth living."