Powered by a Forsaken Child 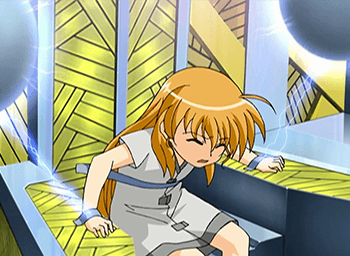 A piece of Applied Phlebotinum that doesn't work unless you pay a really ghastly price... or have someone else pay that price for you.

Can have The Dark Side effect, as in being willing to pay the price can make you more evil. May be the result of a Deal With The (Super-Powerful Alien) Devil. See also Black Magic and Utopia Justifies the Means. In those cases it is much of the time a justified example of a Moral Event Horizon since The Dark Arts frequently require leaving empathy behind to go on.

May be a form of Aesoptinum. Very common in Fantastic Aesop stories. May use Human Resources or a Captured Super-Entity as the Power Source. If done on a wide enough scale, it becomes Industrialized Evil.

Compare Artifact of Doom and May Contain Evil. Contrast Psycho Serum, for which the users themselves generally pay the price. See also Mainlining the Monster, Human Sacrifice, and Horror Hunger. This is a type of Living Battery. Hamster-Wheel Power plays it for laughs.

Mithra was born with the power to enhance mantra through prayer. The Seven Deities saw potential in it and use her as a battery to enhance their mantra reserves.

Mithra was born with the power to enhance mantra through prayer. The Seven Deities saw potential in it and use her as a battery to enhance their mantra reserves.