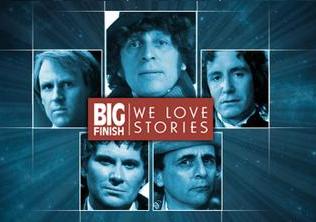 Big Finish Doctor Who is a long-running and ongoing audio series by Big Finish, with Nicholas Briggs as the current Show Runner. The series is written and produced by much of the regular Doctor Who crew. Pretty much every single companion and villain from the TV series shows up in the episodes, (almost) always played by the original actors, in addition to many new characters. Characters whose actors are unavailable (or dead) appear in prose stories told by their friends, or at times voiced by other actors. The episodes are available both as CDs and as digital downloads.

The company started producing Doctor Who audios in 1998, with a range of stories focusing on companion Bernice Summerfield. The following year, the licence for stories starring the Doctor was secured. The main Doctor Who range released a new story every month from 1999 to 2021, with an extra one every September; the monthly range was made up of four trilogies of stories (having previously bounced from Doctor to Doctor every month), plus one standalone release (usually an anthology of short stories) every year, and featured the Fifth, Sixth and Seventh Doctors.

Following the huge success of Paul McGann's audio adventures, the Eighth Doctor's episodes were expanded beyond the monthlies and replaced by a long separate series from 2007 onwards ("The New Eighth Doctor Adventures"), which were also broadcast on BBC radio; these were wrapped up in 2011 and the Eighth Doctor's continuing adventures were next told in series of box sets. After the conclusion of the main range, the adventures of the Fifth, Sixth and Seventh Doctor also took on box set forms. The Fourth, War, Ninth and Tenth Doctors also exclusively star in their own series outside of the monthlies. Some stories are presented as special releases or in separate box sets. Big Finish originally did not have the licence for the 2005 revival, but now can use every Doctor up to the Twelfth; their "classic series" (also known as the "heritage" licence) and "new series" licences were broadly kept separate at first, but have begun to crossover more and more so stories where the Fourth Doctor meets the Weeping Angels and the Fifth Doctor takes on the Slitheen start to appear.

The Big Finish Doctor Who continuity also currently includes (but is not limited to):

And thanks to one big-ass crossover,

we've also got (if somewhat tangentially, since according to the creator they were included through Iris crossing universes):

Thanks to a smaller crossover in ''Tartarus''

are episodes that were intended for the TV series, but never made (the stories in this range vary from scripts that were completely written before being abandoned, to plot outlines that have been adapted into complete stories). Various adaptations of existing Doctor Who Expanded Universe stories, such as the Doctor Who stage plays or various novels, have also been recorded; there is currently an ongoing range of Doctor Who New Adventures adaptations. The company also publishes original tie-in novels, and used to publish Short Trips books.

Although the audios are (and always have been) officially part of the Whoniverse, other Doctor Who media can at times contradict or overwrite the events described here, or even adapt them for the televised continuity. In the early years, Big Finish marked stories taking place in the Doctor Who New Adventures continuity or Doctor Who Magazine continuity as "Side Step" episodes. It soon took on a more holistic approach, and later stories cross over into various other Doctor Who continuities without setting strict boundaries. In the interest of avoiding a dread Continuity Snarl (considering its massive amount of interconnected and yet mutually exclusive stories), Big Finish had long since introduced the concept of the Axis of Time, which allows for different timelines to exist independently of each other. This allows the company to treat all its stories as canon within their own respective timelines and universes, which it happily does, without having to worry about being contradicting (or being contradicted by) other Who media. To cement Big Finish's general canonical status, though, the 2013 TV series minisode "The Night of the Doctor" (written by Steven Moffat) referenced several Big Finish companions by name.

Before Big Finish, the crew made many full-cast Doctor Who audio adventures under the BBV Productions brand, which had a similar atmosphere to Big Finish. Earlier than that, Nicholas Briggs played the Doctor in the 1984 fan group project Doctor Who Audio Visuals, and adapted many of these stories into later Big Finish episodes.

Big Finish ended up having a Big Influence on the TV series. A number of the writers were hired for the 2005 TV series recommission, and several new series episodes have had direct audio antecedents. Most notably, Robert Shearman's episode "Dalek" was adapted by him from his audio "Jubilee", and "Rise of the Cybermen" / "The Age of Steel" (as well as elements of "Doomsday") took strong inspiration from "Spare Parts", with author Marc Platt getting a story credit on the episodes. Also notable are a few bit characters who, from 2001 onwards, were played by some Scottish guy named David Tennant who really wanted to be in Doctor Who — which seems to have come full circle, as Big Finish now has a range of Tenth Doctor audio dramas in which Tennant reprises his role.