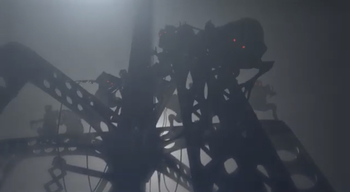 What is inside the TARDIS?
"Zagreus sits inside your head / Zagreus lives among the dead / Zagreus sees you in your bed / And eats you when you're sleeping..."
—The Eighth Doctor, "Zagreus"
Advertisement:

Just like its parent series, Big Finish Doctor Who has some rather unsettling moments.