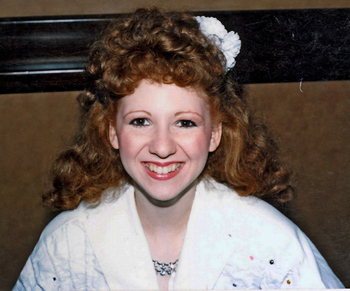 Bonita "Bonnie" Langford (born 22 July 1964) is an English actress, dancer and singer. She is known for her acting roles as companion Melanie "Mel" Bush on Doctor Who and Carmel Kazemi in EastEnders.
Advertisement:

She came to prominence aged just six when she won the talent show Opportunity Knocks in 1970. A career as a child actress soon followed, with roles in the films Bugsy Malone (1976) and Wombling Free (1977), and a starring role as Violet Elizabeth in the TV series Just William (1977-78).

After taking time out to focus on studying at Italia Conti Stage School, Langford spent the early 1980s focussed on stage acting. This included appearing in a production of The Pirates Of Penzance with future Doctor Who co-star Sylvester McCoy.

In 1986, she returned to television when she was cast in Doctor Who as companion Melanie "Mel" Bush, alongside Colin Baker's Sixth Doctor. She made her debut mid-way through Season 23, in "Terror of the Vervoids". Uniquely, she was introduced as a companion who the Doctor had already been travelling with for a significant period of time, as part of the season-long The Trial of a Time Lord arc.

At the end of the season, Colin Baker was unceremoniously fired from the show and replaced by Sylvester McCoy, meaning the show never got the chance to show how Mel actually met the Doctor. Langford stayed on as Mel for McCoy's first season, before the production team chose to write her out and replace her with Sophie Aldred as new companion Ace.

Mel is generally remembered as one of the worst companions in Doctor Who history, but the fandom has become increasingly willing to acknowledge that this is not entirely Langford's fault, as the poor quality of writing for the show at the time and unusual circumstances of her introduction, followed by Baker's firing denying her the chance to have a more conventional introduction, meant she never had a fair crack at the whip.

Langford subsequently reprised her role on-screen as Mel in the 1993 special "Dimensions in Time", ironically a crossover with Eastenders, which she would join as a regular cast member 22 years later.

From 1999 onwards, she has also reprised the role on Mel in audio from for Big Finish Doctor Who, which has provided her with much higher quality scripts than she was given for the televised show and given her the chance to show that she was capable of portraying Mel as a far more interesting and rounded character than the one-note Damsel in Distress she was written as for the main show.

In 2022, Langford briefly reprised her role as Mel in televised Doctor Who for a one-line cameo in the BBC Centenary Special "The Power of the Doctor".

Langford is the only regular actor of the original Doctor Who series to have been born during its run (even her successor as companion, Sophie Aldred, was born in 1962).

Her acting roles include: