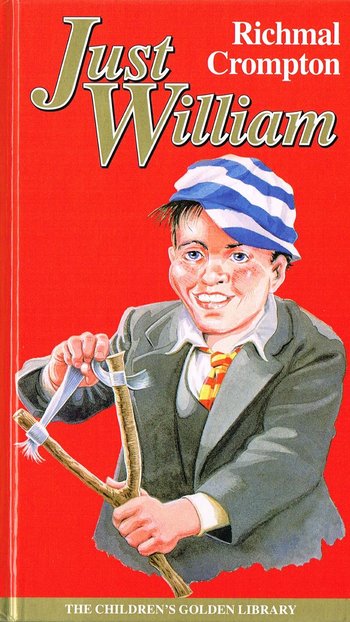 William is a mischievous and adventurous, if mostly well-intentioned, boy, cheerfully indifferent to school and the baffling (to him) rules of adult life. With his best pal Ginger and other friends Douglas and Henry, he forms the Outlaws, whom he leads into all manner of escapades, scrapes and misadventures — sometimes due to his natural rebelliousness, though as often as not while trying to do something actually quite useful. Each volume contains up to a dozen or more short, largely stand-alone stories (bar one full-length novel), rather than being a single narrative.

The series is a strong user of Comic-Book Time; each book is set in the era in which it was written and yet William is 11 throughout — for nearly half the 20th century. The first collection was published in 1921 and the 39th in 1970.

William is unique in schoolboy literature: confident, strong-willed, independent-minded with original world-views, a born leader who is keen to be chief in any undertaking of the Outlaws. He does not care about his clothes or appearance, wears a scowl as his best "company manners" and hates small talk. He loves to play Red Indians and pirates, and readily embarks on any project from catching wartime spies to making a "moon rocket", to editing a "newspaper" or organising a "circus" or "show", often featuring his pet mongrel dog Jumble as reluctant star. He usually has a withering contempt for girls and women (except his mother) but can occasionally be chivalrous and quietly has a soft spot for a young neighbour, Joan, who admires him enormously.

A rebel and die-hard optimist, William often shows a strong sense of responsibility when the situation demands, an unwillingness to back out of challenges and a bulldog-like determination to overcome hurdles. His imagination and love of adventure constantly get him into strange and difficult situations. Peculiar complications often arise when he tries to "help" others, but as fortune favours the brave, William usually wins. His 'motto' is: "Doin' good, rightin' wrongs, spreadin' happiness and walking down the narrow path of virtue."

Advertisement:
Titles in the series

The stories have been adapted numerous times for various media. Three movies (Just William, Just William's Luck and William at the Circus) were produced in The '40s, as was a radio series. Later on, in The '90s, BBC released several Audiobook adaptations of the stores read by Martin Jarvis, which are probably the most well-known adaptations to date.

No less than four TV series have been made based on the characters and stories. The first one, produced for the BBC in 1962-63, was simply called William whereas the three subsequent series (in 1976, 1994 and 2010) used the Just William title, which has gradually come to stand for the series as a whole.