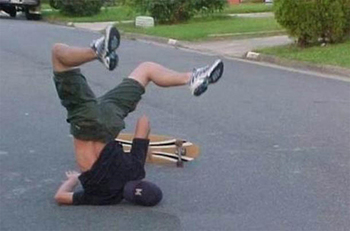 Ooh, a Full Scorpion!
"Everybody do the Flop!"
— Dougal Flopguy, asdfmovie
Advertisement:

A staple of slapstick and other forms of physical comedy, a Face Plant refers to any instance where someone ends up having their face be the first part of their body to impact the ground after falling. The results to the victim can vary from simple embarrassment to serious injury or even death (though Rule of Funny usually precludes it from going this far), depending on how hard the person hits the ground, what the surface they're falling on is, and how high they're falling from.

Not to be confused with the Anime & Manga trope of Face Fault, where someone winds up face-first on the ground after witnessing or being told something absurd.

A student fails at standing up school when he falls flat on his face.

A student fails at standing up school when he falls flat on his face.