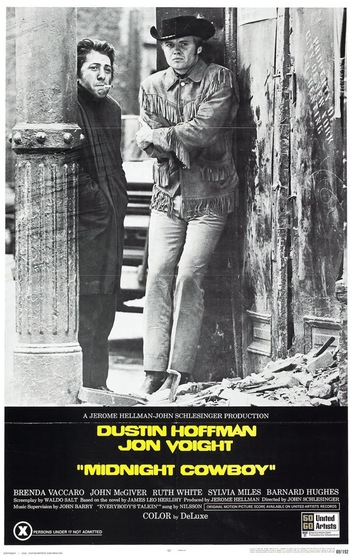 A 1969 film adapted from the novel of the same name by James Leo Herlihy, directed by John Schlesinger and starring Jon Voight and Dustin Hoffman.

Joe Buck (Voight) is a dishwasher in a rural Texas diner, who's not the sharpest knife in the drawer. One day he decides to dress up like a rodeo cowboy and move to New York City, hoping to prostitute himself to wealthy women. He burns through his savings very quickly, unable to hustle, and is taken in by Enrico "Ratso" Rizzo (Hoffman), a small-time con man with a bad leg and tuberculosis. They scrape by as best they can, hoping to escape to Florida one day...