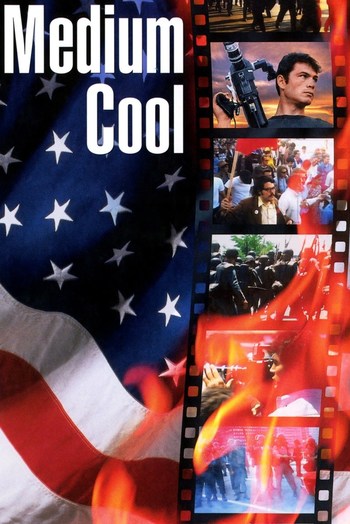 "Look out Haskell, it's real!"
"Mama! Mama! / Someone said they made some noise.
The cops / have shot some / girls and boys.
You'll sit home & drink all night.
They looked too weird ... it served them right."
— The Mothers of Invention, "Mom & Dad",

Medium Cool is a 1969 American film about the unhealthy interaction between a corporate media in search of spectacle and violence and a restless and angry populace. It predated Network by about seven years. It's notable as one of the few films directed by prolific cinematographer Haskell Wexler (who's also credited with the cinematography and the screenplay).

It takes place in Chicago in the summer of 1968. The film stars Robert Forster as a young cameraman who is basically The Last DJ within his news organization, struggling to get the word out about what's actually going on in the streets. Fans of media criticism will note that the subsequent whitewashing of his reports is largely accurate. When we meet him, he's apolitical and driven, with his own code, seeing the role of the journalist as a quest to "capture" the moment on film as it really happened. As he accidentally gets to know some of his subjects, Character Development ensues.

It's also famous for a simple reason: it's just about the only Mockumentary fictional film ever to be deliberately shot and filmed during the course of a historical event: The 1968 Chicago Democratic Convention and police riot, during and after the assassination of Robert F. Kennedy which preceded it.

That's right: they filmed all the scenes "in real",* As James Cameron might incredulously put it with the scripted actors and cameramen wandering through historical events. Aluminum Christmas Trees abound for contemporary viewers, since as we all know, Reality Is Unrealistic.

Interestingly, when the film was first scripted, it wasn't intended to be about the Movement versus "The Man" at all. The director wanted to shoot a piece in docu-cam about the indifference of the media towards the problems of the poor in inner-city Chicago, focusing on an Appalachian family.* Chicago and Baltimore once had large Appalachian slums. After all, Martin Luther King Jr. was promising a major march on poverty in lieu of racism that summer, similar to his March on Washington in '63, to urge the next administration (which he hoped would be RFK) to take the money from The Vietnam War and use it to re-fund Great Society programs.

However, after both MLK and RFK got shot during the course of initial filming, director Haskell Wexler had made friends in Fred Hampton's Chicago Black Panther Party during the course of making the film (one of the scenes is an interview with the Panthers basically playing themselves). They informed him that a massive demonstration was underway for the summer of '68 and Wexler decided to center the climax of his film around that.

The title is from a famous Postmodern thesis by media critic Marshall McLuhan, The Medium is the Message: namely the idea that there are "hot" mediums such as theater that are highly interactive, and then there are more "cold" mediums, like television, which lull the audience into a stupor require little interaction from the audience.

The Internet, which has room for huge amounts of interactivity but mostly confined to correspondence with ill-informed people, would thus be an example of a populace that prefers its Medium Cool. With lukewarm spots such as wikis, like the one you may be editing now. The Situationists like Guy Debord would probably ask why you are in here on the computer when you could be out forming a flash-mob or impromptu theater, of course.

The film was rated "X" by the Moral Guardians for political content on its release (the film contains little sexual content or swearing), the first film to do so (swiftly followed by Midnight Cowboy); thus making the title reference all the more meaningful.

Robert Forster stars as John. Verna Bloom, who stars as Eileen, appeared as Mrs. Wormer ten years later in Animal House. A young Peter Boyle, already bald, appears briefly as the manager of a gun range that caters to women.