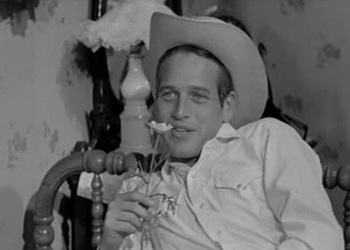 "Little by little the look of the country changes because of the men we admire... You're just going to have to make up your own mind one day about what's right and wrong."
— Homer Bannon
Advertisement:

Hud is a 1963 American drama film, directed by Martin Ritt and starring Paul Newman, Patricia Neal, and Melvyn Douglas. It was adapted from Larry McMurtry's 1961 novel Horseman, Pass By.

It's a story about a family of cattle ranchers in the Texas Panhandle. Homer Bannon (Douglas) is the aging, widowed patriarch, running things with his headstrong, rebellious son Hud (Newman) and his guileless teenage grandson Lonnie (Brandon deWilde), who's the son of Hud's deceased brother. Also present is the Bannons' world-weary live-in housekeeper, Alma (Neal).

Hud is arrogant, self-centered, and dishonest, taking advantage of his family and friends. When one of the cows on the ranch dies, Homer sends for a state veterinarian, against the advice of his son, who wants to sell off the cattle before anyone realizes they're sick. The veterinarian diagnoses foot-and-mouth disease, lethal to cattle, which threatens to drive the ranch into bankruptcy and pits Hud against his father.