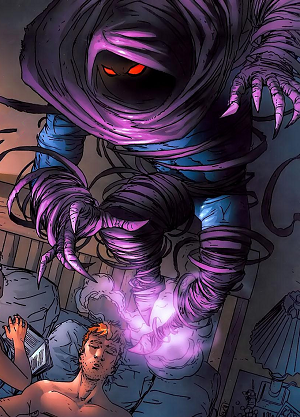 A character that exists in the real world because someone dreamt them to be. The relationship between the dreamer and the Living Dream can work in at least three different ways, with quite a bit of a sliding scale between them.

In all these variants, she may very well be unaware of the fact that she is someone else's dream, or alternatively be unsure which version of her is the waking one.

Subtrope of Tulpa. Compare Living Memory, where the "person" once actually existed. See also Spontaneous Generation, Puff of Logic, Sleep Paralysis Creature and I'm Not Afraid of You.