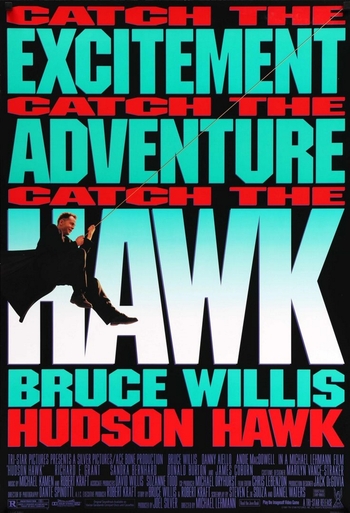 "Hi! I'm being blackmailed into robbing the Vatican by a psychotic American corporation and the CIA!"
— Hudson Hawk
Advertisement:

Gentleman Thief extraordinaire Eddie "Hudson Hawk" Hawkins has just gotten out of prison, and all he really wants is a cappuccino and an honest job. However, his parole officer has teamed up with two Italian brothers with the surname "Mario" to force him to do One Last Job that leads to a madcap series of capers that do all they can to defy summation.

Before it's over, Eddie will hurtle down a freeway on a gurney, unknowingly flirt with a nun, burgle the Vatican with fifty dollars' worth of seemingly random items, discover Leonardo da Vinci's secret formula for turning lead into gold, battle candy-bar codenamed CIA agents (and one damned annoying crotch-biting dog), and if he survives all of this, then he can have his coffee.

The film was made at a time when Bruce Willis was still making the transition from comedy roles like Moonlighting to his Action Hero typecasting. Older tropers experienced with the actor's pre-Die Hard career will know this means he mugs a lot and does just about anything for a laugh. And he still has hair (well, mostly ... reportedly, a significant part of why the film went over budget was that Willis insisted on CGI to hide his thinning hairline

It was William Conrad's final film appearance before his death in 1994.